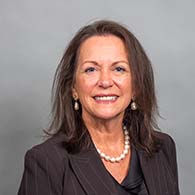 A graduate of William Woods and Oklahoma State University, she has earned four certifications in negotiation at Harvard. Prior to entering the field of CTE, Cindy’s business experiences include management, community development and design positions in St. Louis, Dallas, Atlanta and Washington, DC. With a background in research-based product growth strategies, while working in Atlanta, Cindy provided statistical market analyses for major corporate clients including CNN, The Atlanta Journal-Constitution, Time, NPR, Newsweek, Burger King, Arby’s, No-Nonsense and Texize.

In professional and personal areas of leadership, Cindy led the creation and staffing of Metro Technology Center’s Downtown Business Campus, served as Chair of The Oklahoma Venture Forum, was founding Chair of the Center for Municipal Excellence (forming a ten-year partnership between her former Employer Francis Tuttle Technology Center and the City of Edmond that led to a new campus), President of the Stillwater Junior Service League, ED of the Metro Tech Foundation and was recent chair of a major annual fundraiser for the OKC Museum of Art.

Formerly serving as National Secretary for United for Libraries, she is active as a member of the Metropolitan Library Commission, a member of the placemaking team for the OKC Innovation District and the Creative Oklahoma BOD. She is married to Francis Tuttle Superintendent, Dr. Tom Friedemann, and they have four children and six grandchildren.