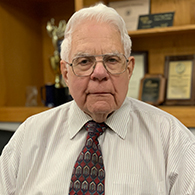 Prior to his retirement in June 2021, Gerry Paist had been the Superintendent of the Pathfinder Regional Vocational Technical High School District in Palmer, Massachusetts since 1974, and at that time was the longest-serving school superintendent in Massachusetts. He credits that longevity to the students and staff of the District and especially to the outstanding members of the Pathfinder School Committee. During his tenure at Pathfinder, the District grew from 4 to 9 towns, program offerings from 10 to 15, and enrollment from 400 to 620. Previously he spent six years as an administrator at Westfield State College in the office of the Vice President and Academic Dean.

Following graduation from Lafayette College, Gerry attended Harvard University’s Graduate School of Education where he received his M.A.T. degree in June 1962. He subsequently served as a mathematics teacher in the public schools of Wayland and Stoneham. In 1966 he received a leave of absence from Stoneham to pursue doctoral work at Harvard where he ultimately received his Ed. D. from the Graduate School of Education’s Administrative Career Program in June 1971.

Gerry reports that a school superintendent’s position is often a 70-hour week, but he found time to be a season ticket holder for the Springfield (MA) Thunderbirds Hockey Team, the Springfield Symphony Orchestra, Broadway in Boston, City Stage, and the University of Massachusetts Fine Arts Center.

Gerry’s professional associations have included the American Association of School Administrators, Mass. Assn. of School Superintendents, the Association for Career & Technical Education, and the Mass. Assn. of Vocational Administrators. He has served MASS as Chairman of the PALS Committee and as President of the CT Valley Round Table and MAVA as President during the onset of Proposition 21/2

He currently serves on the Board of Directors of NCLA, and he is also a long-time Board Member and past Chairman of the Quaboag Hills Chamber of Commerce in Palmer, Mass.

At MAVA’s Retirement Program in August 2021, Gerry was presented with the David J. Cronin award, the highest honor in Massachusetts CTE.