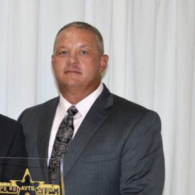 Roger King has been the Superintendent/CEO of Green Country Technology Center since 2018. Prior to this position, he was the Assistant Superintendent of Indian Capital Technology Center from 2014 to 2018 and the Muskogee Campus Director from 2011 to 2014. He was a public school administrator from 2008 to 2011. He began his career in CTE as an agricultural education instructor. He taught agricultural education for thirteen years from 1994 to 2004 and from 2005 to 2008 and served as the Northeast District Agriculture Education Program Specialist for the Oklahoma Department of Career and Technology Education from 2004 to 2005.

He is very active in economic development as he serves on the Okmulgee Area Development Corporation and the Okmulgee Mainstreet Board of Directors. He is also a member of all the Chambers of Commerce in Okmulgee County.

Roger is married to Sherry and has three children, Bailey (26), Blake (23), and Brylee (19). They reside on the Rocking K Ranch in Boynton, Oklahoma.